JENNY SINCLAIR INTERNATIONAL ARTIST SELECTED AS HUMANITARIAN OF THE YEAR BY THE EUROPEAN JOURNAL. 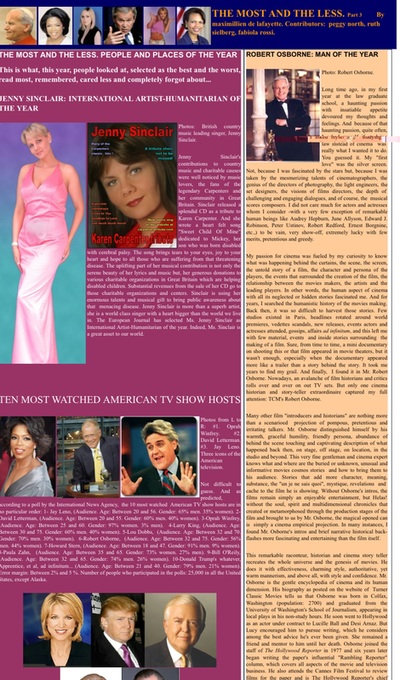 
"Jenny Sinclair's contributions to country music and charitable causes were well noticed by music lovers, the fans of the legendary Carpenters and her community in Great Britain. Sinclair released a splendid CD as a tribute to Karen Carpenter. And she wrote a heart felt song "Sweet Child Of Mine" dedicated to Mickey, her son who was born disabled with cerebral palsy. The song brings tears to your eyes, joy to your heart and hope to all those who are suffering from that threatening disease. The uplifting part of her musical contribution is not only the serene beauty of her lyrics and music but, her generous donations to various charitable organizations in Great Britain which are helping disabled children. Substantial revenues from the sale of her CD go to those charitable organizations and centers. Sinclair is using her enormous talents and musical gift to bring public awareness about that  menacing disease. Jenny Sinclair is more than a superb artist, she is a world class singer with a heart bigger than the world we live in. The European Journal has selected Ms. Jenny Sinclair as International Artist-Humanitarian of the year. Indeed, Ms. Sinclair is a great asset to our world." 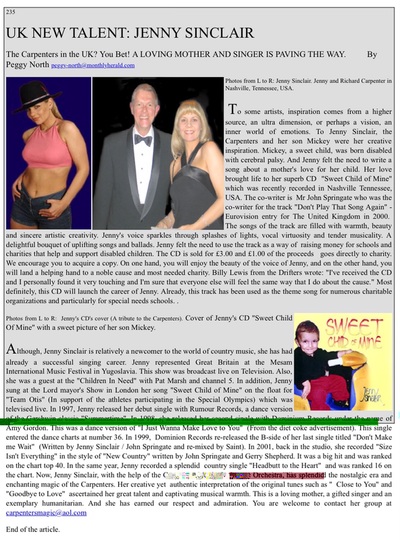 The Carpenters in the UK? You Bet! A LOVING MOTHER AND SINGER IS PAVING THE WAY.  By Peggy North

To some artists, inspiration comes from a higher source, an ultra dimension, or perhaps a vision, an inner world of emotions. To Jenny Sinclair, the Carpenters and her son Mickey were her creative inspiration. Mickey, a sweet child, was born disabled with cerebral palsy. And Jenny felt the need to write a song about a mother's love for her child. Her love brought life to her superb CD  "Sweet Child of Mine" which was recently recorded in Nashville Tennessee, USA. The co-writer is  Mr John Springate who was the co-writer for the track "Don't Play That Song Again" - Eurovision entry for The United Kingdom in 2000.  The songs of the track are filled with warmth, beauty and sincere artistic creativity. Jenny's voice sparkles through splashes of lights, vocal virtuosity and tender musicality. A delightful bouquet of uplifting songs and ballads. Jenny felt the need to use the track as a way of  raising money for schools and charities that help and support disabled children. The CD is sold for £3.00 and £1.00 of the proceeds   goes directly to charity. We encourage you to acquire a copy. On one hand, you will enjoy the beauty of the voice of Jenny, and on the other hand, you will land a helping hand to a noble cause and most needed charity. Billy Lewis from the Drifters wrote: "I've received the CD and I personally found it very touching and I'm sure that everyone else will feel the same way that I do about the cause." Most definitely, this CD will launch the career of Jenny. Already, this track has been used as the theme song for numerous charitable organizations and particularly for special needs schools. .


Although, Jenny Sinclair is relatively a newcomer to the world of country music, she has had already a successful singing career. Jenny represented Great Britain at the Mesam International Music Festival in Yugoslavia. This show was broadcast live on Television. Also, she was a guest at the "Children In Need" with Pat Marsh and channel 5. In addition, Jenny sung at the Lord mayor's Show in London her song "Sweet Child of Mine" on the float for "Team Otis" (In support of the athletes participating in the Special Olympics) which was televised live. In 1997, Jenny released her debut single with Rumour Records, a dance version of the Gershwinclassic "Summertime". In 1998, she released her second single with Dominium Records under the name of Amy Gordon. This was a dance version of "I Just Wanna Make Love to You"  (From the diet coke advertisement). This single entered the dance charts at number 36. In 1999,  Dominion Records re-released the B-side of her last single titled "Don't Make me Wait"  (Written by Jenny Sinclair / John Springate and re-mixed by Saint). In 2001, back in the studio, she recorded "Size Isn't Everything" in the style of "New Country" written by John Springate and Gerry Shepherd. It was a big hit and was ranked on the chart top 40. In the same year, Jenny recorded a splendid  country single "Headbutt to the Heart"  and was ranked 16 on the chart. Now, Jenny Sinclair, with the help of the Carpenters Magic Orchestra, has splendidly recreated the nostalgic era and enchanting magic of the Carpenters. Her creative yet  authentic interpretation of the original tunes such as "  Close to You" and "Goodbye to Love"  ascertained her great talent and captivating musical warmth. This is a loving mother, a gifted singer and an exemplary humanitarian. And she has earned our respect and admiration. You are welcome to contact her group at jennysinclair11@hotmail.co.uk 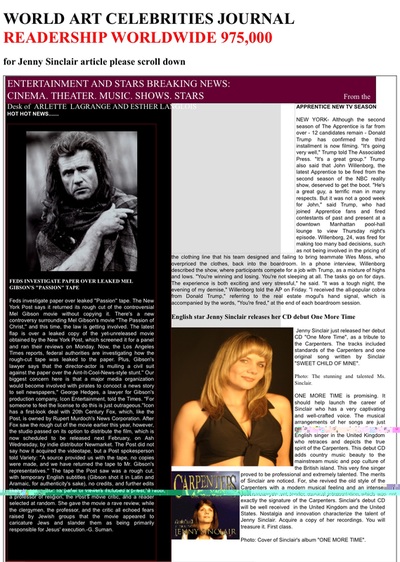 Jenny Sinclair just released her debut CD "One More Time", as a tribute to the Carpenters. The tracks included standards of the Carpenters and one original song written by Sinclair "SWEET CHILD OF MINE".

ONE MORE TIME is promising. It should help launch the career of Sinclair who has a very captivating and well-crafted voice. The musical arrangements of her songs are just perfect. Sinclair is probably the only English singer in the United Kingdom who retraces and depicts the true spirit of the Carpenters. This debut CD adds country music beauty to the mainstream music and pop culture of the British island. This very fine singer proved to be professional and extremely talented. The merits of Sinclair are noticed. For, she revived the old style of the Carpenters with a modern musical feeling and an intense, passionate yet tender musical interpretation which was not exactly the signature of the Carpenters. Sinclair's debut CD will be well received  in the United Kingdom and the United States. Nostalgia and innovation characterize the talent of Jenny Sinclair. Acquire a copy of her recordings. You will treasure it. First class. 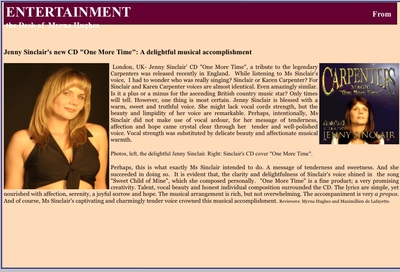 London, UK- Jenny Sinclair' CD "One More Time", a tribute to the legendary Carpenters was released recently in England.  While listening to Ms Sinclair's voice,  I had to wonder who was really singing? Sinclair or Karen Carpenter? For Sinclair and Karen Carpenter voices are almost identical. Even amazingly similar. Is it a plus or a minus for the ascending British country music star? Only times will tell. However, one thing is most certain. Jenny Sinclair is blessed with a warm, sweet and truthful voice. She might lack vocal cords strength, but the beauty and limpidity of her voice are remarkable. Perhaps, intentionally, Ms Sinclair did not make use of vocal ardour, for her message of tenderness, affection and hope came crystal clear through her  tender and well-polished voice. Vocal strength was substituted by delicate beauty and affectionate musical warmth.

Perhaps, this is what exactly Ms Sinclair intended to do. A message of tenderness and sweetness. And she succeeded in doing so.  It is evident that, the clarity and delightfulness of Sinclair's voice shined in  the song "Sweet Child of Mine", which she composed personally.  "One More Time" is a fine product; a very promising creativity. Talent, vocal beauty and honest individual composition surrounded the CD. The lyrics are simple, yet nourished with affection, serenity, a joyful sorrow and hope. The musical arrangement is rich, but not overwhelming. The accompaniment is very a propos. And of course, Ms Sinclair's captivating and charmingly tender voice crowned this musical accomplishment. Reviewers: Myrna Hughes and Maximillien de Lafayette. 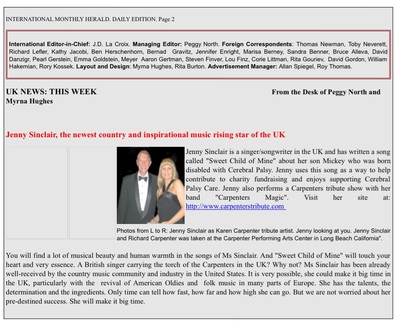 Jenny Sinclair, the newest country and inspirational music rising star of the UK

Jenny Sinclair is a singer/songwriter in the UK and has written a song called "Sweet Child of Mine" about her son Mickey who was born disabled with Cerebral Palsy. Jenny uses this song as a way to help contribute to charity fundraising and enjoys supporting Cerebral Palsy Care. Jenny also performs a Carpenters tribute show with her band "Carpenters Magic". Visit her site at: www.carpenterstribute.com

You will find a lot of musical beauty and human warmth in the songs of Ms Sinclair. And "Sweet Child of Mine" will touch your heart and very essence. A British singer carrying the torch of the Carpenters in the UK? Why not? Ms Sinclair has been already well-received by the country music community and industry in the United States. It is very possible, she could make it big time in the UK, particularly with the  revival of American Oldies and  folk music in many parts of Europe. She has the talents, the determination and the ingredients. Only time can tell how fast, how far and how high she can go. But we are not worried about her pre-destined success. She will make it big time.